I never in this world thought it would happen. After all, I planted eight seeds way back on March 13th, and by April first only one had germinated so I planted another three seeds. By April 15th, I had a total of four Purple Beauty plants, tiny but alive. By May 12th, there were only two survivors that were large enough to repot into a larger container. The other two were too small, and had shown absolutely no growth in weeks, so they were composted.

All my other (25 or so) peppers grew large and lush and are filled with large to giant sized peppers, but the Purple Beauty plants have just finally begun growing. One is about 12" tall now, and the other is around 18". The bigger one has given birth....here is my first Purple Beauty! 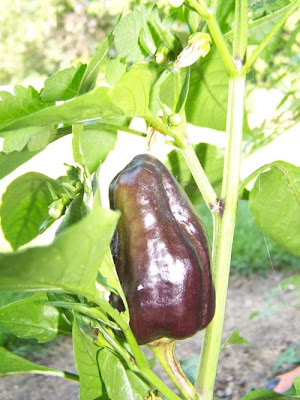 It's still a baby, not much over two-inches long, but isn't it pretty!

I've been getting so many cucumbers, today I decided to make sweet pickle relish. Last year my neighbor, Pat, made a delicious zucchini relish, and I had plans to make it this year. Unfortunately, I don't yet have any zucchini. I Googled for a relish recipe in which I could use my cucumbers, and the very first one I found happened to be the same as the one Pat uses for her zucchini relish! So cucumbers and zucchini are interchangeable in the recipe. 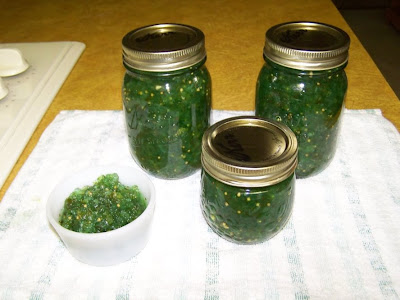 I guess I could have left out those four drops of green food coloring. It probably would have been green enough without it, as I used all green peppers (none of mine are red yet). I used my freshly picked garden cucumbers and peppers, and the last of my onions in this recipe, and it made three pints, although I only canned 2-1/2 pints and left some out for immediate use. I'll be making more of this real soon, as I have lots of cukes and green peppers to use up.

We eat, therefor we garden.