It was supposed to get over 100 degrees again today, and it certainly started out hot enough. I watered the garden yesterday, and I watered again this morning. The heat has made everything look rather droopy. Before I came back in, I pulled out a couple of nasturtiums that were crowding my pepper plants. They are pretty, and I do like flowers in my garden, but I must remember to only allow one plant in a square foot next year, not four. They really got very large, and created too much of a canopy for other plants. I decided I'd better pick the green beans, as I missed two days in a row, and had some that were larger than we like. The dogs enjoy them, so they will get the big beans in their chicken dinners tonight. I pulled a few carrots for Cookie, the house rabbit, and since I was right next to the potato bed, decided to feel around for a few more new potatoes. I had used all of the ones from Thursday in the potato salad we had for dinner last night. 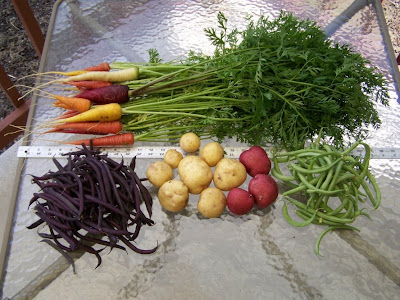 I came in with 1 pound 3 ounces of Royal Burgundy beans, 11 oz. of Contender beans, 2 pounds 7 oz. of Yukon Gold and Norland potatoes and 1-3/4 pounds of Rainbow Blend carrots.

It didn't reach 100F after all. It's clouding up now, so I expect we'll get a real thunder boomer this evening. It might rival the fireworks we watched last night.

There were thirteen of us here for dinner.......well, twelve if we don't count the baby. We had fried chicken, potato salad, baked beans, corn on the cob, potato chips, olives, cupcakes and ice cream, beer, booze, iced tea and pop. Enough to satisfy everyone! 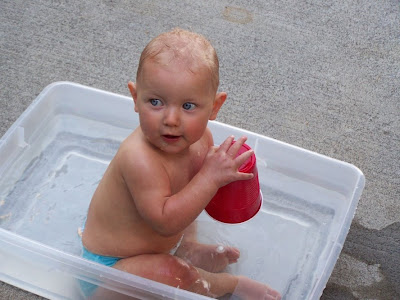 After dinner, we put baby Alicyn in a plastic tub of water and let her splash and play for a while, then about half the group walked to the river to watch the fireworks. The rest of us sat in our driveway, where we had an excellent view, and access to even more food. We ate pico de gallo and chips, and just about finished off the cupcakes. Nobody can say we weren't well fed!

***
Several people commented about yesterday's picture of Otto. Well, it wasn't Otto. It was a picture I found through Google Images, and it was a dead ringer for the Otter Dawg, right down to the tongue! Ribbit said it was Otto's stunt double, and "sooner or later he’ll have stand-ins for all of his difficult work; walks, vet visits, baths. He’ll show up for feedings and belly rubs. Next you’ll be noticing he pauses in odd places in his speech, can’t use contractions, and looks like he bathes every other Wednesday. Then you change his name to Kevin Costner and his transformation into diva superstar will be complete." 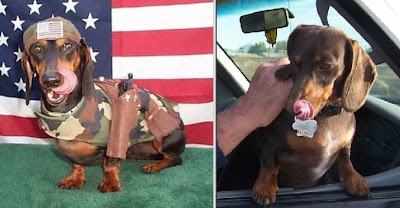 Ribbit also commented on my frog collection, saying she preferred cows. Just one question, Ribbit. If you prefer cows over frogs, why don't we call you "Moo" instead of "Ribbit"?

I couldn't find a "stunt double" for Annie, but she hopes everyone had a wonderful Fourth of July, and wants you to know she went off of her diet long enough to have a cupcake last night. 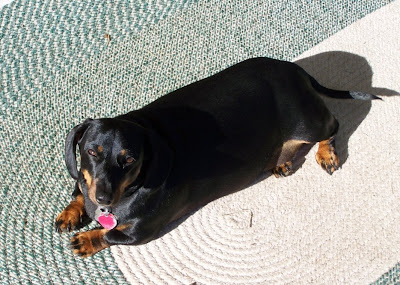 Uh..Annie, are you sure you only had ONE cupcake?