Monday (yesterday) in the Garden

The heat is too intense to get much done. All of the SWCs (self watering containers) have to be filled twice a day, and the tomatoes in them still wilt mid-day. The tomatoes that are planted in the ground are withstanding the temperatures just fine, with watering every other day. Even the ones in the five gallon buckets fare well with once a day watering, so I think this will be my first and my last year of using SWCs.

The flavor of the tomatoes has improved over those early picked ones. I was just about to pull up the Russian Persimmon, but I tasted one today and it was actually quite good. My Chico III, a Roma variety, looks terrible. It looks like it's affected with blight, but it has some lush new green growth coming out on one side of it. It is loaded with tomatoes, many of them nearly ripe, and I'm undecided whether to pick them and pull out the plant or pick them and prune it back to new growth to see if it gives me another crop. The Celebrity right next to it is also beginning to show some damage to its lower leaves....I hope the disease isn't spreading.

The peppers are beautiful! I've never grown them so large and so plentiful. The plants were so heavy they were horizontal. I spent the evening staking, tying and fencing them to hold them upright. A few of them are getting sun scald, but most are just gorgeous. Since I forgot which varieties were planted where, I'm anxious for some to turn color so I know just what I have!

I'm considering pulling out my remaining nasturtiums. I looked under one today, and there were thousands of sow bugs underneath it. I've had more insect damage this year than ever before, and I'm thinking the plants are too close and providing excellent hiding places for multitudes of sow bugs and earwigs.

Powdery mildew is rearing its ugly head in the pumpkin patch and on one of the lemon cucumbers. I think I'll cut off the really bad leaves, then begin spraying the plants with one part milk to nine parts water, which is supposed to control the mildew.

Our son, John, came by this afternoon, and I loaded him down with tomatoes, cucumbers, crookneck squash, refrigerator pickles and bread and butter pickles. I still have tomatoes all over the kitchen counter, so I need to do some canning. 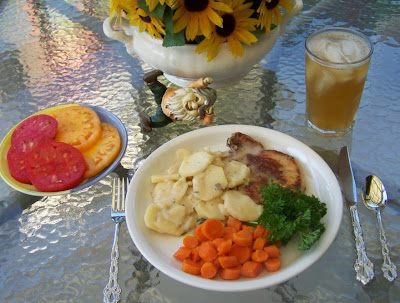 Dredge pork chops in flour. In skillet, brown chops in oil, seasoning each with salt and pepper. Remove chops from pan and set aside. In drippings, blend soup, milk and parsley; heat to boiling.

"We eat, therefor we garden"