Usually, through the growing season, we have "garden dinners", using home grown and/or local produce, when most everything turns out pretty good. I don't always show the photos, as taking pictures is a bit time consuming and the food can get cold while I'm trying to get a good shot of it. For instance, to get good color, I have to take the food outside to the patio, where I have natural light. It just doesn't photograph as well with the flash, under artificial light. 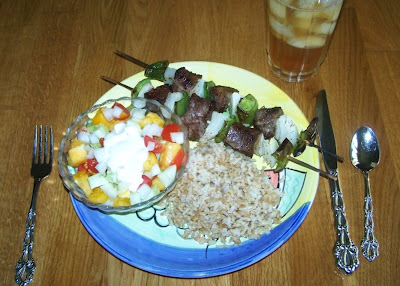 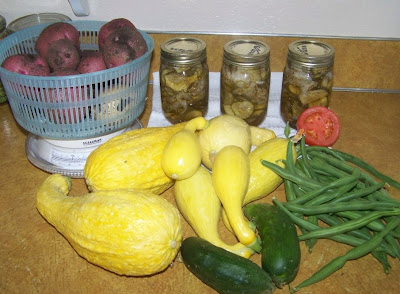 Here is today's harvest and three pints of bread and butter pickles that I canned last night. Two of the yellow crookneck squash got too large, so they will go into the compost and not be added to the harvest weight. There is only half a Rutgers tomato, 'cause I just had to try it out....it wasn't all that great, I have yet to get a really good tomato. I did, however, eat the other half on my BLT for lunch. The potatoes, over three pounds of them, were "stolen" out from under the plants. That makes about 18 pounds of potatoes that I've harvested from the 3' x 4' bed so far. I expect to get over thirty pounds from it by the time they are all dug. The green beans are slowing down....finally. We are getting rather tired of them.

I'm doing some heavy pruning on one of the SWC tomatoes. I water it each day, but by afternoon it is completely wilted down. I figure it will take less water with less leaf area, but I'm only removing a few each day so as not to stress out the plant even more. It's a Rutgers variety, the one that didn't have a very tasty first tomato.

Our weather is supposed to be in the 98-103F range for the remainder of July. It must be quite humid, as I'm dripping and it's only 78F in the house! Of course, I've been out in the mid-day heat, repairing and replacing sprinklers. Mr. H annihilated one with the riding mower, another was clogged and had to be removed to clean out the screen, and the new soaker hoses were both toast...they lasted about a month before the holes expanded and began ripping. I removed them and put up a temporary impulse sprinkler that I tied into the irrigation system with a hose, so it will water at the same time as the rest of the sprinklers. My next husband is going to know how to install and repair sprinklers!

No "garden dinner" tonight, as I'm cleaning up odds and ends from the freezer.