Extreme heat has taken a bit of a toll on the garden. Our temperatures have hit or exceeded 100F for eleven days now, and have been over 90F for 24 days. We've had .08 inch of rain since July 1. I planted some lettuce today, but it will be a miracle if it germinates in this heat. After all, it reached 108F this afternoon. That's hot. 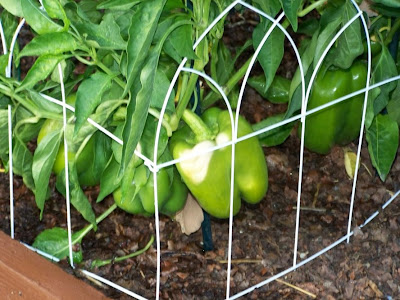 Some of the peppers are suffering from sun scald. When I spot them, they get picked and used in my sweet pickle relish.

I stayed inside in the air conditioned kitchen most of the day, and made four pints of pasta sauce from a Mrs. Wages mix. I taste tested this, and liked it better than the chili base I canned last week. I was planning on making jalapeno jelly, so picked a half dozen jalapenos to add to the six I had picked previously, and a couple of large peppers that had some sun scald on them. I donned my gloves and cleaned and seeded the hot peppers, but I was wondering just how hot they could be....I had no tears. I got my courage up and took a taste. It tasted just like a sweet green bell pepper! I tasted a seed. No heat at all! So, instead of hot pepper jelly, I got the cucumbers out of the refrigerator and made another batch of sweet pickle relish. 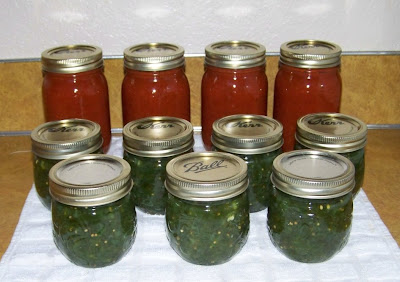 I was cutting back some overgrown borage today, when I swore I could smell a melon....that sweet, musky aroma of a fully ripe cantaloupe. I was standing by the whiskey barrel where I had planted two varieties of melon sent to me by Dan, and I knew there were only two unripe melons on those plants. But I could smell melon! Finally I spied a tiny, softball sized melon that had been hidden by the borage. It was a yellowish color, rather than the gray-green of the aforementioned unripe ones. I reached over to touch it, held it in my hand, and it slipped from the vine and landed at my feet. I had a ripe melon! It was very warm to the touch, from the heat of the day, so I brought it inside and placed it in the refrigerator to cool down a bit. I'll be tasting it soon! 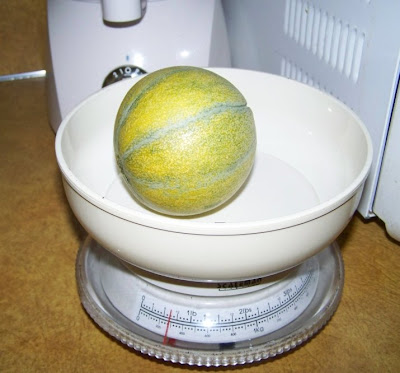 Tiny, 10 ounce melon. I think it's a Petit Gris, as it was hanging off the right side of the barrel.

The garden in August 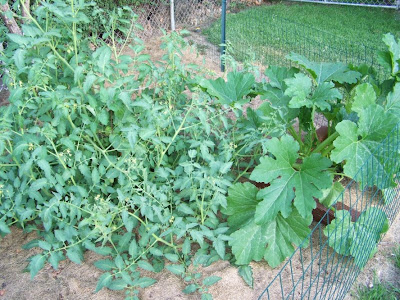 I don't know who is going to win the battle here, Juliet or Zucchini. I thought there would be plenty of room for both, but Juliet is getting quite pushy. 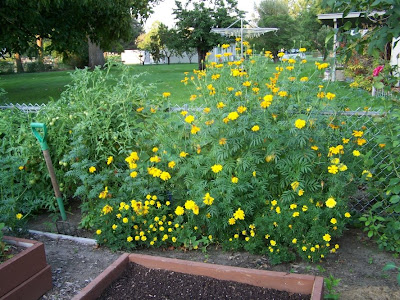 Somewhere in the marigolds, a lemon cucumber lurks. 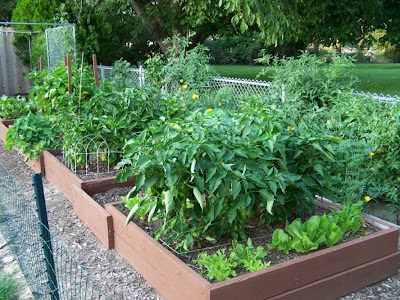 The east garden bed, looking north. Believe it or not, some salad greens (including Romaine) are actually existing in this heat. 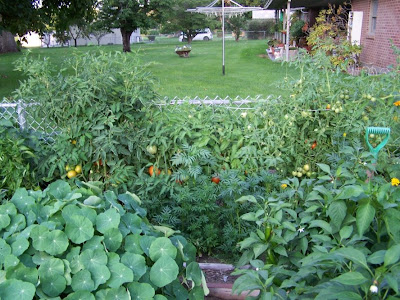 I can see a good crop of tomatoes that need to be picked in the morning. 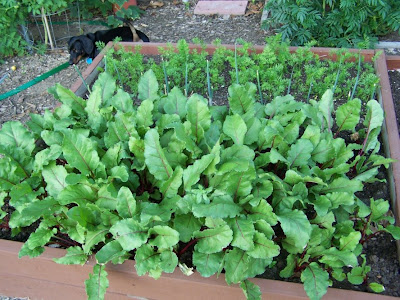 The fall beets, onions and carrots don't seem to mind the heat. 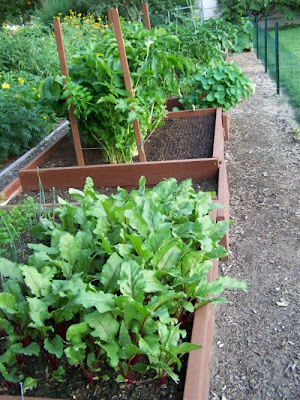 The east garden, looking south. Those parsnips had to be corralled with stakes and garden twine to make room for the lettuce that was just planted, and the spinach that will be planted soon. The parsnips are over 3' high...those are 4' stakes screwed into the sides of the bed. 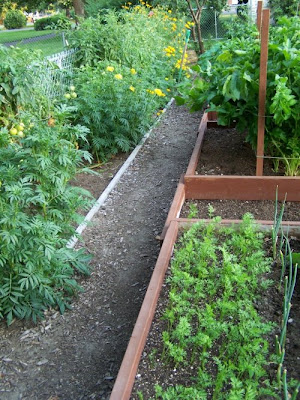 And the other side of the east garden, still looking south. Most of the determinate tomatoes are along this fence line. 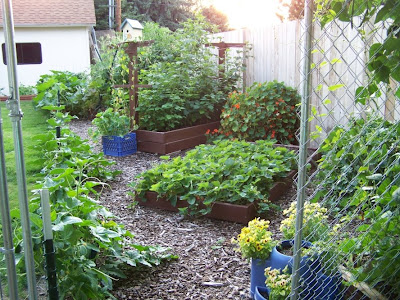 The north garden. We have another batch of baby sparrows in the birdhouse, but the mother is finally getting used to me. She doesn't stop feeding them when I'm right there picking strawberries now. This is their second family this year. 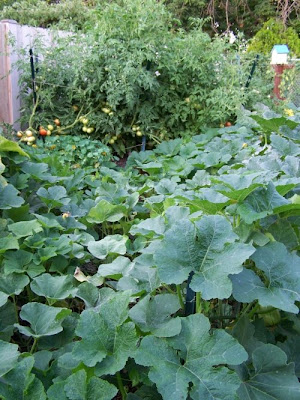 I really have a difficult time getting through the squash/pumpkin bed to reach the indeterminate tomatoes! I have to claw my way through a bed of sunflowers by the fence. 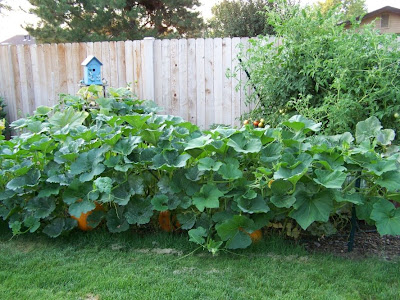 Four more pumpkins are nearly ready to pick, and the one that was picked last week is still sitting on my kitchen counter. 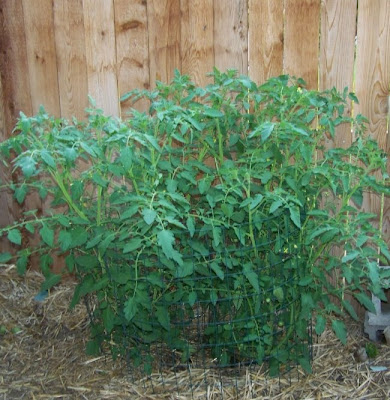 The volunteer tomatoes that I moved out by the compost bin are doing well. One of them has a few tomatoes on it and I'm hoping it's the cherry, as I don't like the Tumbling Toms that are feeding us right now. I think the other came from a Celebrity, so it's anybody's guess what it will turn out to be. 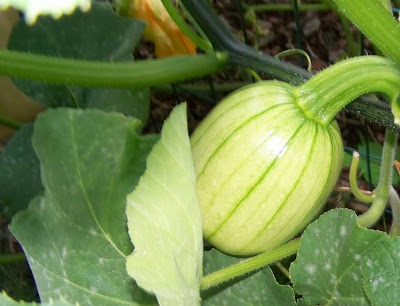 I found some baby pumpkins, so maybe we'll have ripe ones a bit closer to Halloween! There's something just not quite right about big orange pumpkins in July and August. Powdery mildew has really taken over in the pumpkin patch. 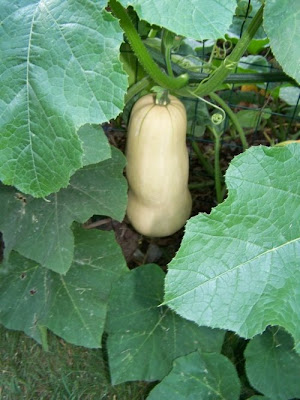 I have so many butternut squash! This one measures 12" in length. It's a good thing it's a powdery mildew resistant variety, because it's growing with the pumpkins, and their leaves are just covered in mildew.

And that's the garden in August. 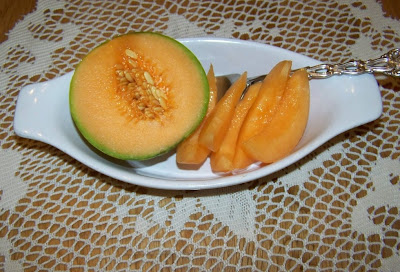 Oh.my.gosh. It was that good.