My little vacation is over, it looks like the garden is going into high gear again. It's supposed to cool down into the 80s later this week, so I'm looking forward to doing some garden cleanup. I already pulled a few of the monster marigolds that were blocking the pathway again, and pulled out the last two of the four diseased tomato plants. A bit of cleanup on that bed, a little compost dug into it, and it should make a nice spot for sowing some lettuce and spinach. I might even try some radishes. Maybe they will grow better for me in the fall than they did in the spring.

I've been waiting until Monday to blog about my week's harvest, but I'm going to talk about what I picked today, as it led to a day of canning. 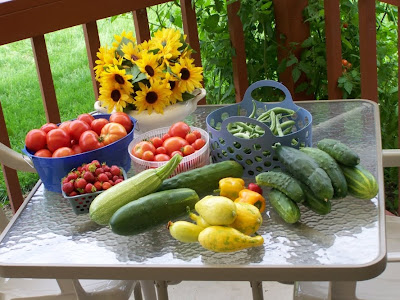 Tomatoes, cucumbers and strawberries are really beginning to get their second wind. Not that the cucumbers ever stopped for even a second! I found three huge cucumbers that had previously hidden from me, and I was afraid they would have to be composted. I'm not a cucumber lover, I won't even eat them unless they're pickled, but I made myself taste one of the large ones and I was pleasantly surprised! It as so sweet, with no trace of bitterness, that I might actually develop a like (not a love) for them. All three of these monsters were sweet and crisp, perfect for pickle relish. After removing the seeds from just two of them, I had enough chopped cucumber for a whole batch of dill relish. That the large cukes tasted so good is reason to grow these again next year. The variety is Spacemaster, and I have them growing in waste basket sized containers (they are actually dollar store plastic waste baskets), two plants to each of three containers. They have given me more than 75 pounds of cucumbers this year, and are still blooming like mad. I have no idea what I'll do with the rest of the cucumbers. I have already made more pickles than we can eat in a year, and given several jars to my kids. I really don't need any more relish....I think I have a lifetime supply by now! I think I might just put them out by the street with a "free" sign!

There were quite a few strawberries today. I froze the last picking to save for making jam, and today's harvest gave me enough to do just that.

My son has been begging for green beans and crookneck squash, so I know where these will go.

I picked quite a few bell peppers, but a few of them found their way to my neighbor's before they were weighed or photographed. Most of them were real small and had some sun scald.

I hope I picked enough tomatoes for another batch of Annie's Salsa, as we are eating it as fast as I can make it! I still don't have any hot jalapenos, so will have to go to the store to buy some tomorrow. 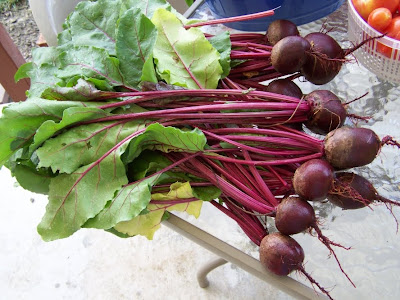 But I do have beets! 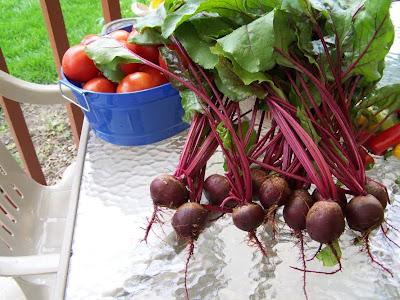 These were planted on June 28, and they are much nicer than the spring beets. They are larger, and the greens are in perfect condition, not bothered by leaf miners like the spring beets. I pulled twenty-four of them for pickled beets, and gave the greens to my neighbor. 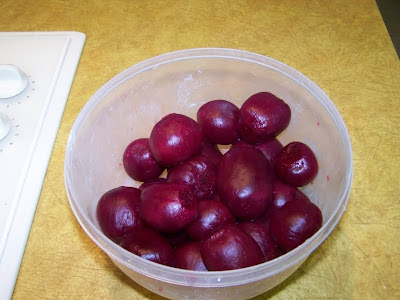 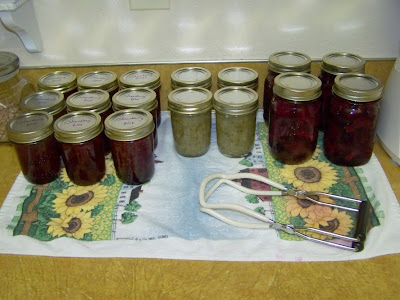 A day's work took care of some of the harvest. Nine jars of strawberry jam, four jars of dill relish (I lacked about a tablespoon of having enough for five jars, so that went into the fridge), and four pints of pickled beets.