This morning I noticed Annie rubbing her face on the rug, so I gave her muzzle a good rub, assuming she had a itch. A bit later, she was trying to push her nose under the throw rug, and we laughed at her antics. An hour or so later, I happened to look at her and saw this.... 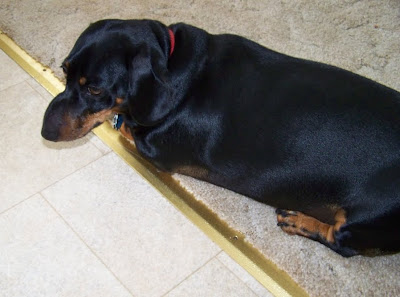 Just look at her nose! It was so swollen , even much worse than the picture shows, that I immediately called the vet. He said to bring her right in, so we got her into the car and Mr. H drove hell-bent-for-leather to the vet's office. I know he was concerned about Annie, as he normally drives like the old man he is....slooooow. Poor Annie, her nose was the only skinny part of her body, and now it's fat!

Three injections to take care of the wasp sting, and a $68 vet bill later, we took her back home, applied an ice pack to her nose for a while, then went hunting for the wasps that were the cause of the incident. We found them, under the eaves of the back patio. 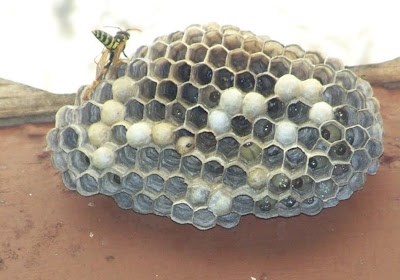 Basically there are three groups of social wasps. The most common are the yellowjackets, accounting for the overwhelming

majority of stinging incidents in the state. These are all in the genus Vespula and the most noxious species is the western yellowjacket (Vespula pensylvanica). Yellowjackets produce a paper nest but the site of the nest is concealed, in an abandoned rodent nest below ground, behind an exterior wall, in hollows of children’s playground equipment, etc. Yellowjackets have diverse tastes. Although they feed on some insects, they readily scavenge sweets and protein-rich foods. They can be serous nuisance problems around uncovered garbage and at outdoor dining areas in late summer.

I sprayed the nest right away, but will wait for evening and do another application. There are still some wasps hovering around out there.

The swelling has gone down a lot on poor Annie's nose. She's acting like she feels just fine, and ran out the door to chase squirrels, just like she normally does.