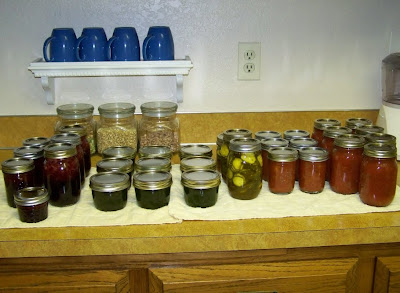 (From left to right) Today I finally picked enough strawberries from my garden to make strawberry jam. I had crushed and frozen the last picking, and with tonight's picking I had four cups of crushed berries. Earlier today I picked bell peppers and jalapenos (the hot ones from the planter) and made hot pepper jam. Then I pickled yesterday's cucumbers and got three jars of bread and butter pickles. The small jars of salsa were a combination of one pint of yesterdays peach salsa that didn't seal (see rant later) with leftovers of the big pot of salsa I canned earlier in the day (recipe follows). Finally, the 7 jars of salsa on the right are Annie's Salsa. No relation to my Annie ;-) Between picking and preserving, along with the other mundane chores like cooking and cleaning and running to the store for another two dozen jars, I've been at it for over twelve hours today. I'm getting slow in my old age!

I'd canned over a hundred jars of food this past few weeks, with no problems. This week I bought some Kerr jar lids, and four out of the ten I've used didn't seal. I had to take two quarts of tomatoes and cook them down to make tomato sauce, then one of those didn't seal! Then there was the one jar of peach salsa that had to be processed again. Look at the brand new Kerr jar I bought today...... 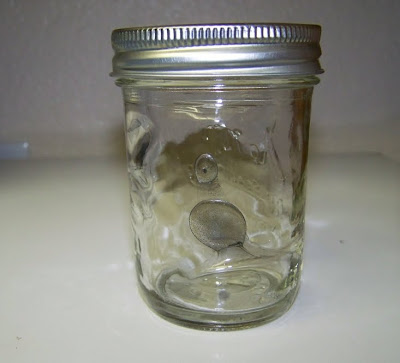 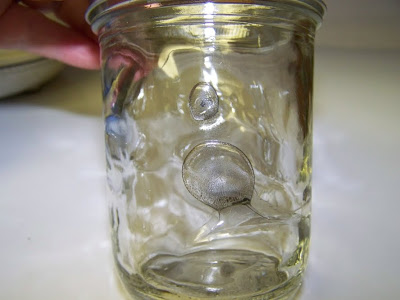 That's two burnt glass bubbles in the side of the jar. How could this pass inspection? Evidently there is no inspection. 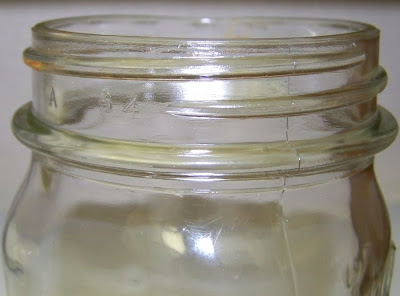 Another Kerr jar that won't seal. Can you see the dip in the rim at the back of the jar?

I can't show you another new Kerr pint jar that came in a case I bought last week, because I already trashed it. They come with lids and rings on the jars, and when I removed the ring from it, there was a big chunk of glass broken from the rim. About the size of half of a dime. And there was no glass inside the jar or the box, so the lid and ring were put on a broken jar, it didn't break in transit.

What has happened to quality control with this company? I used to trust their products, now not so much.

Yes, I emailed the company. No, they haven't responded.


This recipe receives rave reviews on GardenWeb. I haven't tasted the finished product yet, but the uncooked tasted delicious.

8 cups tomatoes, peeled, chopped and drained (slice the tomato on its equator to expose triangular openings into the seed pockets. Squeeze it over a bowl to get out most of the seeds and goo, then chop the remaining meaty part and only use that. )
2 ½ cups chopped onion
1 ½ cups chopped green pepper
3 - 5 chopped jalapenos (I used 5 and left the seeds in one)
6 cloves minced garlic
2 tsp cumin
2 tsp pepper
1/8 cup canning salt
¼ cup chopped fresh cilantro
1/3 cup sugar
1 cup vinegar (bottled lemon or bottled lime juice can be substituted, or a mixture of any of the three)
16 oz. tomato sauce (large can, 12 ounces)
16 oz tomato paste (2 small cans, 6 ounces each)

Mix all ingredients, bring to a boil, boil 10 minutes. Pour into hot jars, process in a boiling water bath, 15 minutes for pints (20 minutes for quarts).