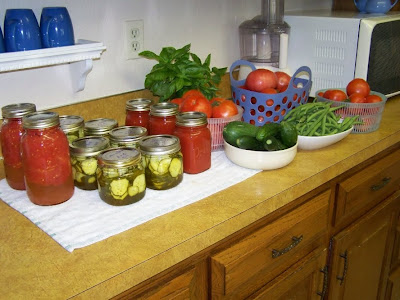 Yesterday, after canning 2 quarts of tomatoes, 6 pints of bread & butter pickles and 3 pints of tomato sauce, I thought maybe I had finally caught up with the garden produce. But it was not to be, I just picked a bunch more. We ate some of the beans for dinner, and I cooked the rest to mix with Annie and Otto's chicken. The cucumbers were refrigerated for the next pickle making session, and the tomatoes were the next day's canning project. 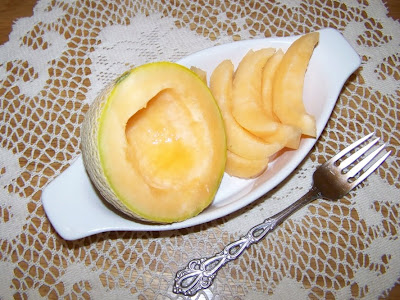 Later that evening I took my stroll around the garden, and found a tiny cantaloupe had fallen from the vine. It's a Hales Best, and should be much larger than the 10 ounces it weighed. I sliced it up and served it to Mr. H...and Mr. H said "It's not very good". It was a pretty and juicy little thing, so I couldn't believe it wouldn't taste delicious. I took a bite. It was tasteless and mealy. It went into the compost. I was expecting deliciousness like we got with our Petit Gris that was harvested earlier this month. 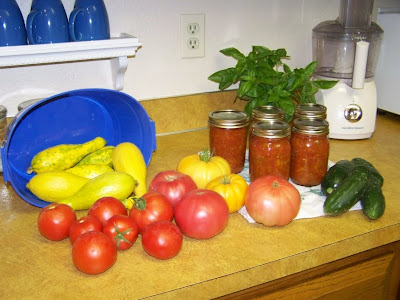 Today I used up some of the tomatoes, some fresh picked bell peppers and jalapenos (from the hot plant), and the last of my neighbor's peaches in a batch of Spicy Sweet Georgia Peach Salsa. I thought this was the recipe Ribbit said was so very delicious, but after I made it I found out the recipe she had blogged about was Peach Barbecue Sauce! I hope my salsa is as good as her barbecue sauce. If anyone else wants to try the salsa recipe, I did the version without celery, and I added a tablespoon of hot pepper flakes for extra heat. Of course, I had to go out to the garden for the evening picking, so there are more tomatoes..... 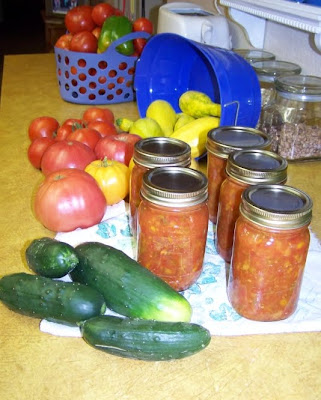 To add to the ones I had leftover from yesterday.