Every year my squash and cucumber plants eventually succumb from powdery mildew, but it's just something I've always lived with.  I've never bothered with sprays or any kind of control, other than chopping off offending leaves until there aren't enough of them left to support any further plant growth.  Last week I noticed my new planting of cucumbers was  showing a lot of PM.  Mr. Granny does love his cucumbers, so I thought "What the hey, might as well give them a spray and see what happens".  I mixed up 1 tbsp.powdered milk and 1 tsp.of baking soda in a spray bottle, added water to fill and a few drops of liquid dish soap, then headed out to the garden to apply it to the leaves of the cucumber plants.  According to what I had read on line, this wouldn't cure already infected leaves, but it might keep the PM from spreading. Two days later, I checked on them, and couldn't believe how much better the plants looked!  I gave them another dousing, and now, another two days after the first application, the difference is very promising! 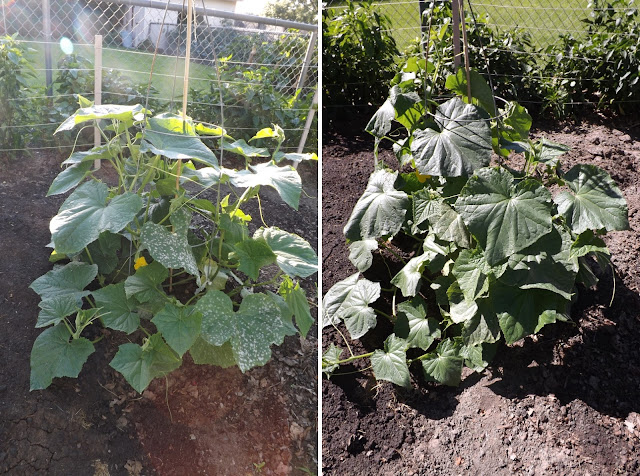 Very little powdery mildew remains on the leaves!  Even the leaves that were badly infected are mostly clear now.  I'm thinking I'd better buy myself a new garden sprayer, just for killing off PM.  A small spray bottle would never work in a squash patch.