I haven't been very active in the garden this week, as I'm still a bit under the weather. I was well on my way to getting over the flu bug, when I relapsed and ended up with a nasty sinus infection. Needless to say, there's been very little gardening or cooking.

I did cook that beautiful parsnip I dug the other day. I sliced it and fried it in butter, with a pinch of sugar, until it was golden and caramelized. Mr. H won't eat parsnips, but Otto (the boy dog) and I ate the whole thing. It was delicious! We had to hide from Annie. Since she has a bit of a weight problem, I didn't think butter fried parsnips would be very good for her. 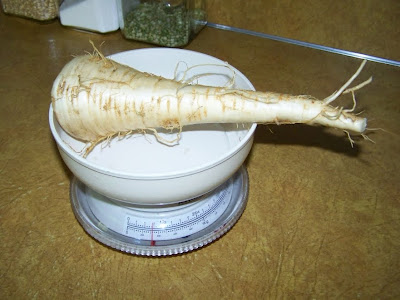 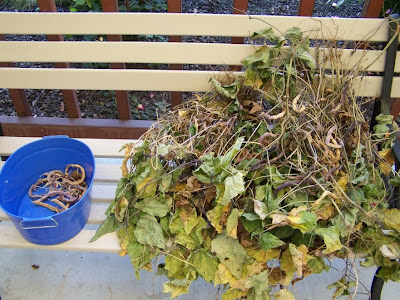 I've had a pile of Royal Burgundy beans drying out on the patio for a couple of weeks. These are the ones I planted for my neighbor. I had asked her to leave a few pods on the vines for next year's seeds, and she was getting anxious to get them pulled out, so I just piled them on the park bench and let them dry. 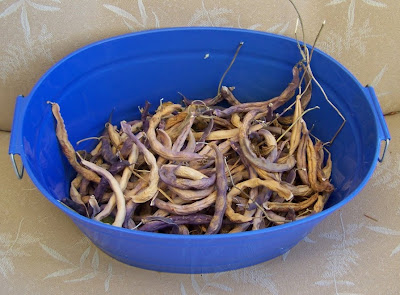 It didn't look like many once I got the pods pulled from the vines. 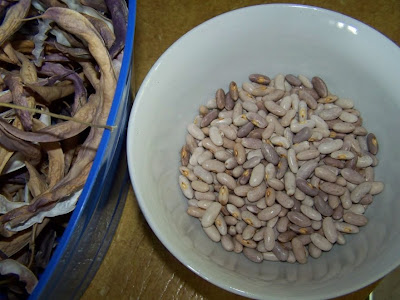 But there were actually quite a few beans in the pods. 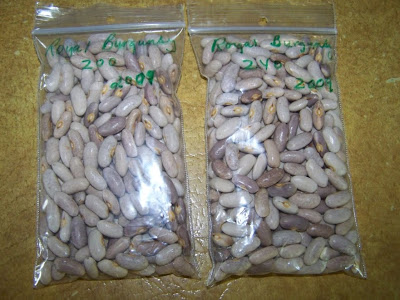 To be exact, there were 440 beans in the pods! That should be plenty for me and Just Jenn next spring. This is my first year of seed saving, so I hope they are all OK! 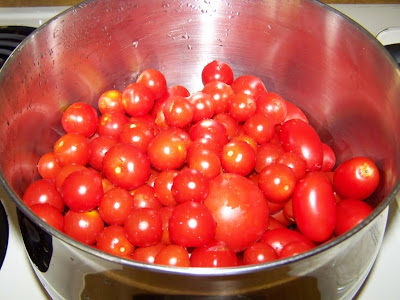 As much as I didn't feel like cooking, the tomatoes were screaming at me to do something. The easiest thing to do was toss them all in a pot, heat them up, puree them in the food processor, sieve out the seeds and peelings, then put them back in the pot and make tomato sauce. I put three cups of thick sauce in the freezer from this batch of tomatoes.

I'm forcing myself to start putting my garden to bed for the winter. It's difficult for me to tear out something that is still productive, but I'll be leaving for Arizona in three short weeks. I picked the cucumbers and pulled all the vines. It was such a good year for them, I have many jars of pickles and relish, and Mr. H still has a bunch of them in the refrigerator for his salads. 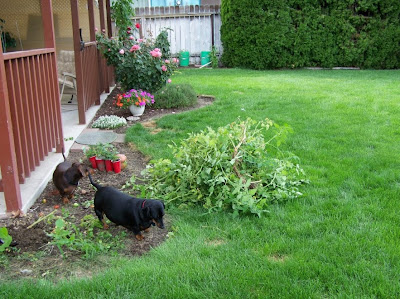 I pulled the cherry tomato from the corner of the patio. It was one that didn't have a lot of flavor and really, I don't need more tomatoes! Once this area is cleaned up, I'll be planting those strawberries that are in the red cups. I think they will be a nice edible ground cover . The buckets in the background got scrubbed and stored in the shed, those tomato cages stacked in a corner for next year. 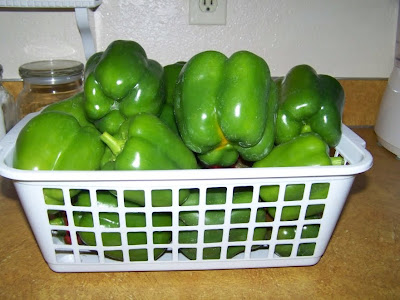 Daughter Amy came over tonight, so I talked her into taking home a basket of bell peppers. There were more than five pounds in this picking, and a lot more still in the garden. She loves peppers, as does my son Scott, so I'll make sure he gets a basket full of them too. Amy is going to make stuffed peppers in the crockpot, so I gave her a jar of my sweet chili sauce to pour over them. I think the sauce will compliment the flavor of the peppers, meat and rice.