*Second post for today, please scroll down for the earlier one.*
Grandson Kevin has an insatiable appetite for learning. It can be anything from gardening to dinosaurs or, in this case, cooking. Out of the clear blue sky (that is rather gray today), I hear "Grandma, how do they make noodles?"

What is the best way to learn? By doing!

I reached back through the cobwebs in my old brain, trying to remember how I made noodles years and years ago. I had him break an egg into the food processor, then fill half the empty shell with water, and add that to the egg. Next he measured in 1/2 teaspoon of salt, and turned on the processor. He began adding flour, 1/4 cup at a time, until he had a really firm dough...about a cup, I think. Now it was time for the hard work to begin.

With a well floured board and rolling pin, he sprinkled the dough with more flour, then began rolling. 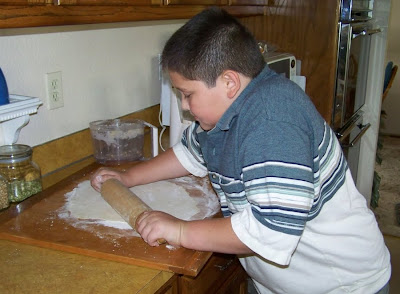 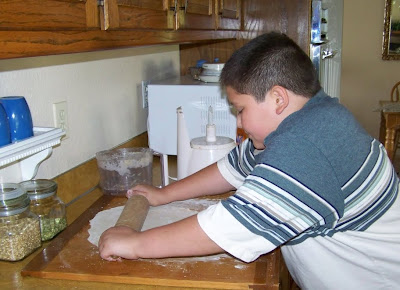 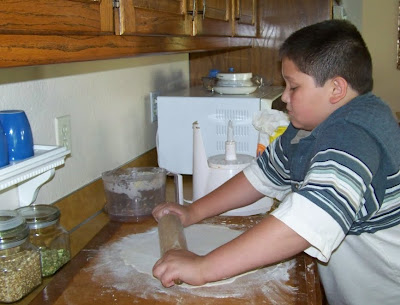 and rolled some more. 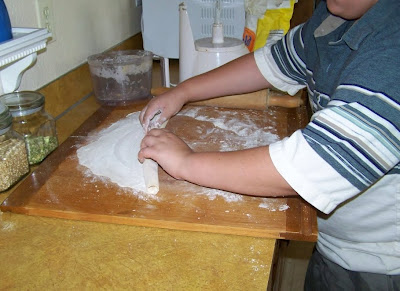 And when it was as thin as he could possibly get it, he dusted it with more flour, then began rolling it up loosely..... 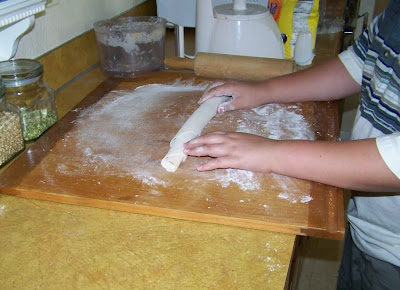 until he had rolled it up into a neat tube shape. 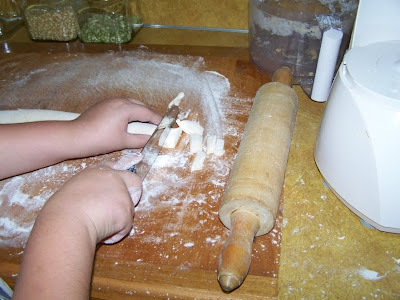 He then sliced it into narrow strips. 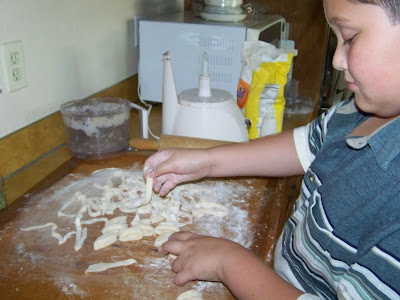 Then unrolled the strips onto the cutting board. 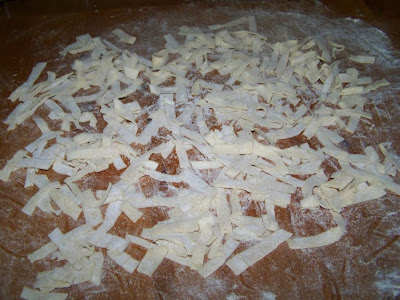 Once all the strips had been unrolled, he used the scissors to cut them into approximately 2" lengths, and spread them out on the board to dry for a bit. After a couple of hours, we boiled the noodles in salted water until they were tender, about 10 minutes. 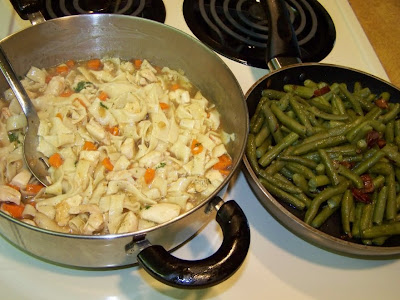 I made them into a delicious chicken and noodles skillet. We had freshly picked green beans, cooked with bacon and onion.... 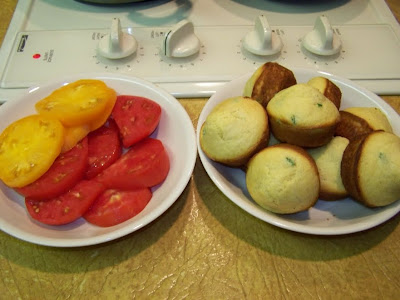 Along with sliced red and yellow tomatoes and jalapeno corn muffins with real butter. Mmmm! 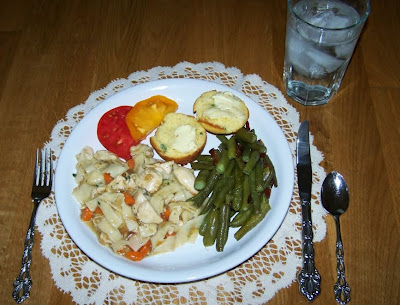 Kevin's noodles were delicious! In fact, the entire meal was delicious! The muffins were a real winner, too. Even if Mr. H refused to taste them. Kevin and I ate our share and more!

As if that wasn't enough food for the evening, we also had a moist, delicious zucchini cake, with some Bordeaux Cherry Chocolate ice cream. *MissyM, don't you dare read any farther!

In a large bowl, cream butter and sugar until light and fluffy. Add the eggs, one at a time, beating well after each addition. Beat in vanilla. Combine the flour, cocoa, baking powder, baking soda and salt; add to the creamed mixture alternately with buttermilk. Stir in zucchini.

Pour into three greased and floured 9-in. round baking pans. Bake at 350° for 25-30 minutes or until a toothpick inserted near the center comes out clean. Cool for 10 minutes before removing from pans to wire racks to cool completely. Spread frosting between layers and over the top and sides of cake. (All of my round cake pans are in my AZ kitchen, where I do most of my baking, so I baked this in a 9" square pan and an 11" x 7" pan, and still had enough batter for a couple of cupcakes that I cooked in the microwave oven. Of course, I had to increase the baking time for the larger cakes by about 10 minutes or so.)

I ran out of cocoa, so I made a vanilla buttercream frosting. I think I liked it even better than the fudge frosting! I beat half a stick of soft butter, a bit of vanilla, powdered sugar and some evaporated skim milk together until it was smooth. Sorry, I didn't measure anything.