Is it winter yet? Well, if it isn't, it had better hurry and get here! I am out of pint size canning jars again, and the cucumbers and tomatoes just won't slow down. This morning I gave my neighbor, Pat, all of the tomatoes I had sitting on my counter from earlier pickings, then picked another three pounds for her, and another seven pounds for me. I was happy to see the Kellogg's Breakfast are beginning to ripen again. I had to give three varieties another taste test, and I was pleased the Early Girl are better now than when the first ones ripened. Earlier ones had really hard cores, but these seem just fine. The Better Boy, on the other hand, weren't quite as tasty as the earlier ones. 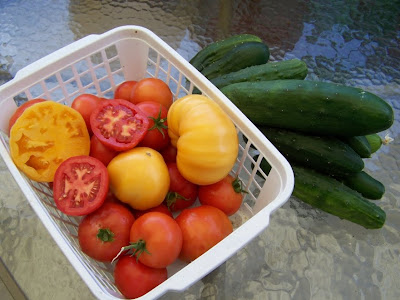 I sent all my extra cucumbers to the low income apartments, then picked another big bag full this morning. I ended up making yet another batch of pickles, and had to put them in quart jars. 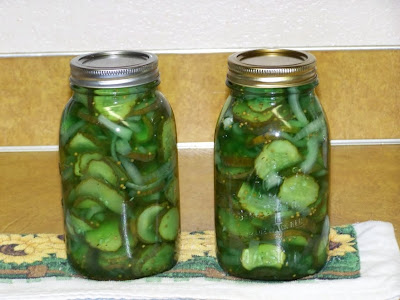 We opened a jar of the bread & butter pickles that I'd made a couple of days ago. I've tried three different recipes this year, and have yet to taste the first two, but I must say we do love these! They are much sweeter than any other bread & butter I've ever tasted, and I am a sweet pickle lover. The recipe has gone into my favorites file, and will be my pickle of choice again next year. I don't think we'll have any trouble using up these quart jars!

Granny's Favorite Bread & Butter Pickles
4 quarts sliced medium cucumbers, about 6 pounds
1 1/2 cups sliced onions
1/3 cup salt
2 quarts crushed ice or ice cubes and water
3 cups sugar (they were too sweet after sitting in the jars for a few weeks)
1 1/2 teaspoons celery seed
2 tablespoons mustard seed
1 tablespoon ground ginger
3 cups vinegar
Wash cucumbers thoroughly. Slice unpeeled cucumbers into 1/4-inch slices; discard ends. Add onions. Sprinkle salt over top; cover with ice and water; let stand 3 hours. Drain thoroughly. Combine sugar, spices and vinegar. Heat just to boiling. Add drained cucumber and onion slices and return to boil. Pack hot pickles loosely in clean, hot pint jars to 1/2 inch of top. Adjust jar lids. Process in boiling water bath for 10 minutes. Yield: 7 pints. *If I have leftover liquid it can be used for refrigerator pickles. Just store it in a covered container in the refrigerator until ready to use, then heat it again, slice the cucumbers into a jar and pour the hot liquid over them and store in refrigerator. 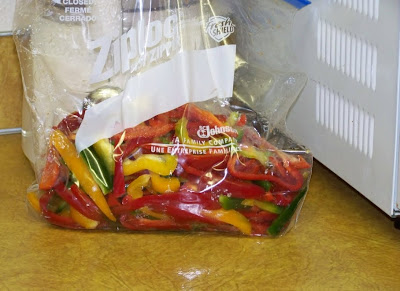 The peppers are still producing well, and I put a half gallon of multi-colored strips in the freezer. I had a lot of red jalapenos, but they still haven't developed any heat. They are just as sweet as the red bells, so I sliced them and included them in the bag of pepper strips. I took a little taste of each one, and only one had a tiny bit of heat beginning to develop. There are so many of those jalapenos left to pick, but all these peppers will taste pretty good in our fajitas this winter, when the ones in the stores are $3 each! 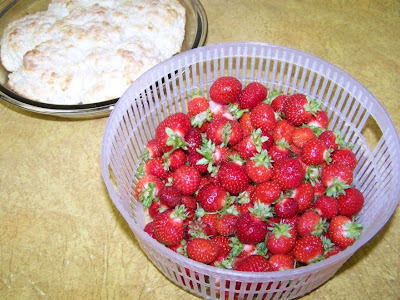 The strawberries are just delicious, and I think they are getting more abundant and a bit larger now that the weather has cooled down a few degrees. Monday night we had strawberry shortcake, and it was so good!

I was joking about "is it winter yet?", since it's still in the mid to high 90s here, but it's not that far off for me. In just 45 days I'll be packing up and heading for Arizona! I have just enough time to plant a few radishes, and maybe a bit of lettuce and spinach, but I'll mostly be doing garden cleanup from now on. I have the pumpkin/squash patch all cleaned out now. It looked really empty, so I moved a bucket of cantaloupe from next to the garden shed. The plant isn't looking a bit happy in its new location, so I might be sorry I moved it.

My neighbor got a new grass catcher for her lawnmower, and I told her I could use a few clippings for my garden paths. The wood chips I had on them has all but disappeared through the year, and I don't like having muddy feet. I think her gardener got a bit too generous with the clippings, though. I had a virtual mountain of them in front of the garden gate, and they all have to be spread into the paths. I wanted to take photos of the September garden this morning, but I think I'll wait until I get the clippings taken care of. The garden isn't at its best right now anyway, as it's just been baking in the heat for the past two months.

I'm not mad at Mr. H now. We went out to dinner to celebrate our 47th anniversary last night, and he said my dinners were so much better than what we paid $42 (plus tip) for. How can I stay mad after that? But it still might be a long, long time before he gets a pumpkin pie ;-)