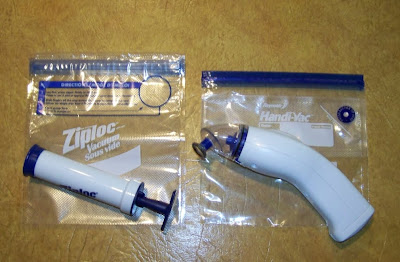 Last year I was happy that Reynolds came out with their Handi-Vac® Vacuum Food Storage System as a low cost alternative to those expensive FoodSaver® systems. I immediately purchased the starter kit and a box of gallon sized bags. To say that I was underwhelmed would be an understatement. Not only was the battery operated air sucker temperamental (sometimes it worked great, others not so well), I found that most of the bags that I did manage to pull the air from leaked the air right back in after a few weeks in the freezer. On top of that, there was no way one could get a full gallon of food in a gallon bag. The food had to sit too low in the bag to allow the vacuum do its job. The final straw was that the bags couldn't be reused, except as a plain plastic bag.....the vacuum system would not work on a bag after opening it. I like to take out small amounts and then reseal the bag and return it to the freezer, and for that, the vacuum system was worthless. The Reynolds system went to the back of the drawer, never to be used again.

Being a sucker for any new gadget I find in the grocery store, I fell for this year's Ziploc® Brand Vacuum Freezer System. So far I'm impressed. Although the vacuum is hand operated, rather than battery operated, it works very easy and takes less time to expel the air than the Reynolds. It's not so touchy, I didn't have to get it exactly centered to begin pumping out the air. The bags are longer, allowing the full amount of food to be put in and still leaving room to suck out the air. It's smaller and easier to store, and easier to take apart to clean. The double "zipper" on the Ziploc bags closes easier and tighter than the single zipper on the Reynolds bags. And the clincher? I opened a Ziploc bag of frozen bell pepper strips, removed a few, zipped it shut and about four pumps of the vacuum sucked the air back out just fine.