Several of the garden bloggers have posted aerial photos of their gardens recently. Well, as far as I'm concerned, aerial photos are for the birds. Only a bird can get high enough to get my entire garden in one picture!

Son John was on the roof of the new shed today, trimming some shingles, so I tossed the camera up to him and asked him to take a few pictures while he was up there in the clouds. It still wasn't high enough to get a shot of the east fence garden. None of my photos show off that garden very well, with its tomatoes, peppers, cabbages, cauliflower, broccoli, Chinese parsley, shallots, garlic, basil, cucumbers, marigolds and nasturtiums. It's hidden by the east garden's carrots, beets, dill, cauliflower, cabbage, broccoli, peppers, nasturtiums, lettuce, parsnips, onions, parsley, bush beans, potatoes and peas. 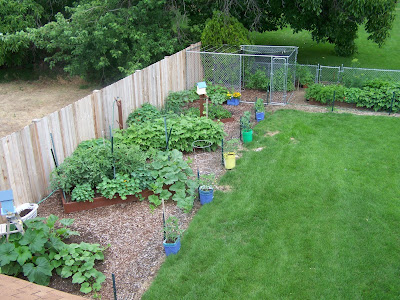 That's as aerial as I can get. 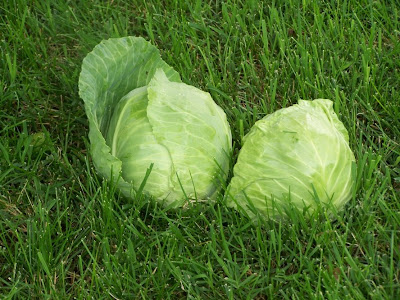 I picked two heads of cabbage today. I kept the one that weighed 2 pounds, and gave the 1-1/2 pound head to my neighbor, Pat. They are just beautiful little heads, no worm or insect damage at all! The leaves (even the outer leaves) are pristine. 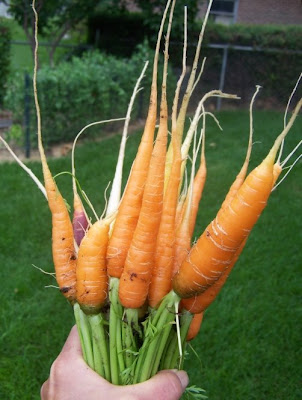 A nice bunch of carrots for our dinner. The Imperator are the best, I'll not bother planting the multi-colored ones again. The yellow carrots are good, but the purple ones are rather ugly, and the white ones have a really hard core and most of them go to seed before they can mature.

We've been eating the Pickled Beets I made last week, and I do like this recipe better than the one I blogged about last year. They aren't too sweet or too sour, they're just right. Mr. H hates beets, but loves these pickled beets. I'll be making them again this week.

I've begun putting sugar snap peas in the freezer, as they are giving us more than we can eat each picking. The regular peas are just now beginning to show me a few pods. Our weather has cooled down to the high 70s again, so maybe the peas still have a chance.

I'm loving my garden right now. The peppers, cucumbers, melons and crookneck squash are all in bloom, the raspberries are beginning to show some color, the beans are forming on the vines, the nasturtium blossoms are beginning to peek out from under their canopy of leaves, and the major bug attacks seem to be over (for now). Bees are buzzing, and worms are wiggling. All is good.