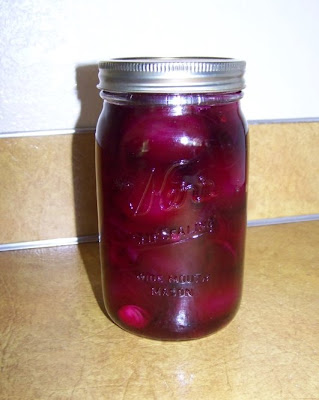 The first quart of pickled beets of the year! I basically used the same recipe that I used last year, but increased both the beet cooking liquid and the sugar. In a week or two I'll let you know if I like it any better. I thought last year's recipe was a bit too vinegary.

*Important Note*
This recipe might be fine if you are going to refrigerate them and eat quite soon, but after reading the newer canning guidelines, it doesn't have a high enough vinegar to water ratio to be completely safe for canning.

I then poured it all into a clean quart jar, and it's sitting on my counter until cool enough to refrigerate. The aroma is delightful! It only made one quart, but there was a lot of pickling liquid left over.