A yard of food....actually more, as I forgot to photograph the berries. There are two varieties of carrots, the longer ones are Imperator and the short ones are either Chantenay or Scarlet Nantes. That's my first green pepper of the year! Actually, it could be a gold or red bell, but whatever it is, I needed one for tonight's salad. There will be more green beans this evening, it got too hot in the garden before I finished picking them. Shallots, shallots and more shallots! I'm using these fresh, drying some I pulled earlier this week, and there are still a lot of them in the garden! Golf ball sized onions are used fresh. This bouquet of herbs consists of parsley, basil and rosemary. Those four smallest potatoes are already gone...nothing better than a home grown raw new potato with a sprinkle of salt! I noticed a bit of scab on one potato. The bed is rich in composted manure, so some scab is not unexpected. 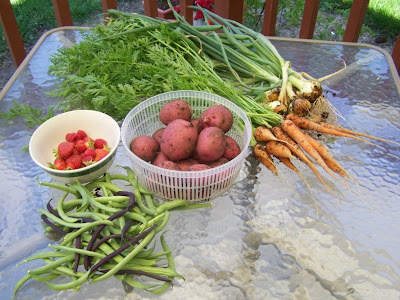 As they come from the garden. With the pound of potatoes I snitched from a single plant five days ago, and the 2 pounds 12 ounces I dug from the same plant this week, that's a respectable 3-3/4 pound harvest from one potato plant! 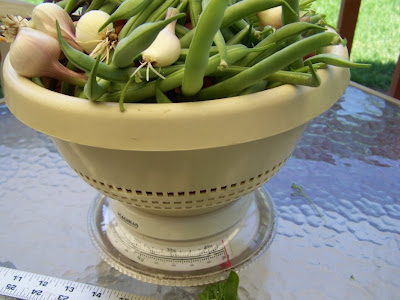 Everything is washed and trimmed before weighing. Today's harvest had to be weighed in two batches, as my scale only goes to five pounds. 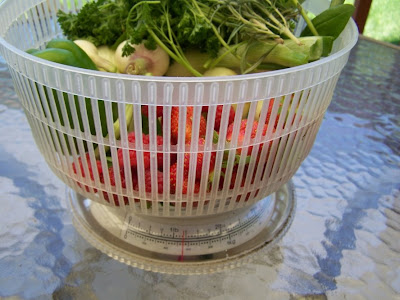 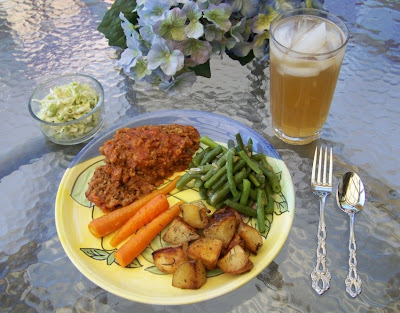 The pan roasted potatoes, green beans with shallots, cole slaw and carrots were awesome. The meatloaf not so much....it fell apart when I tried to remove it from the crockpot, and it tasted just exactly like the cabbage casserole I had on the 24th, sans cabbage! Oh well, at least I didn't heat up the house by cooking it in the oven.