We're expecting 90-100F weather for the next fifteen days. I picked a few peas today, but I think I might just as well pull the vines and plant something else. The peas have been a disappointment. First the sparrows decapitated the blossoms and robbed me of my first picking, then the wind blew them off the fencing and made them practically impossible to pick. They definitely were not worth the real estate they took up.

Speaking of sparrows, one precocious youngster peeked out of the birdhouse today. In fact, he came out of the hole so far, I thought he was going to try to fly. He has feathers, so his first flight probably isn't too far off. Mom and Dad sparrow were really upset with me when I went out to pick beans last night. Their normally cheerful chirping turned into a real sound of fear and warning until I left the garden and they could comfortably return to the nest. I took my camera to the garden this morning, and managed to get a photo of a baby bird. 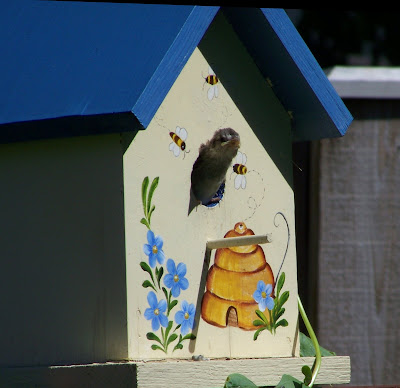 Baby sparrow peeks out of the birdhouse.

The east garden bed #1 has been cleared out, enriched with about two inches of home made compost, and replanted. I put in four squares of Imperator carrots, repeating my earlier success with gluing them to paper mats. This time I used some cheap napkins....you know, the kind that fall apart and stick to your face when you use them. I know they will disintegrate more quickly than the newspaper I used last time. The other side of the bed got five rows of 14 beet seeds, for a total of 70 beets. I'm hoping these get a bit larger than my spring planted beets, and maybe be enough for another eight pints of pickled beets. There is just enough room left for a row or two of green onions...the ones I buy from the grocery store and plant for later use. 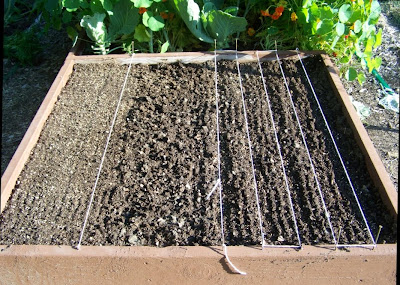 My pole beans are reaching for the sky. I strung lines across the top of the kennel for them to cling to, but they have a mind of their own...they'll go straight up. 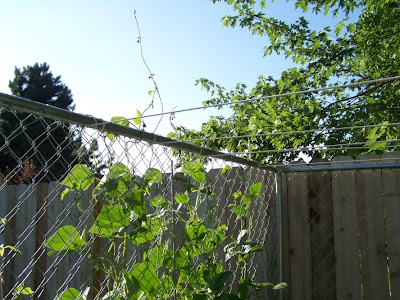 I did some garden cleanup today. I'm trying to give the determinate tomato row a bit more sunshine, so maybe I can get some ripe tomatoes. That meant cutting back some of the big cauliflower leaves and pulling up a giant marigold (they are double the height they were supposed to get). Otto helped ;-) 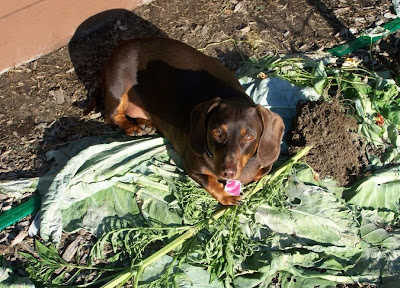 Otto helps in the garden. 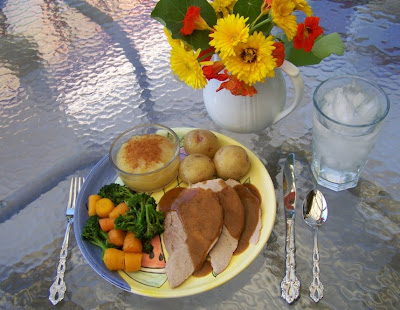 A Bouquet of Calendula, Marigolds & Nasturtiums