My zucchini squash looks as though it has a fungus infection, so I mixed up a batch of cornmeal tea and sprayed it today. My neighbor's looks just the same, only much worse. Nothing else in the squash patch is showing any disease......it makes me wonder if seed can be infected. Anybody know? Both mine and the neighbor's came from the same seed packet. The neighbor bought some kind of spray for hers, but I'd rather try an organic method before I resort to chemical sprays. Speaking of squash, I picked my first yellow crookneck today! It will be so good with tonight's "garden dinner". 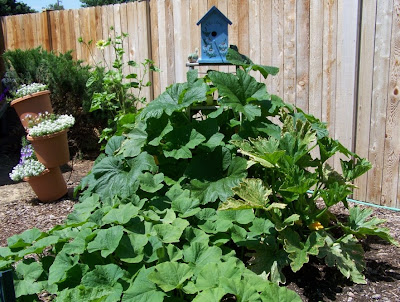 The yellow crookneck squash has grown up over the top of the ladder. The Waltham Butternut squash (foreground) is spreading rapidly and has female blossoms, but no males detected. The zucchini (right) was sprayed with cornmeal tea this morning to hopefully control fungus (click on photo to enlarge)

My melons and lemon cucumbers were looking a bit puny, so I gave them a good dose of liquid fertilizer. The other (bush) cucumbers are growing like mad now, have quite a few small cucumbers on them, but I can't yet tell if they pollinated. I wonder why they call them "bush". They grow quite large...one of mine is almost to the top of the 6-foot fence, the others are being trained on the wire fence, and had to be tied up again today.

I've counted five pumpkins so far. One is already six inches long, and the vines are really overtaking the north garden. 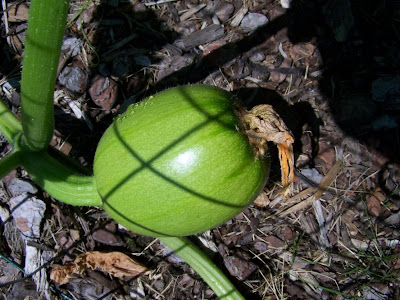 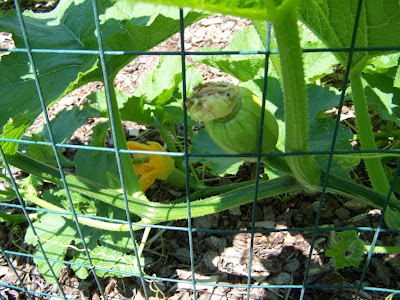 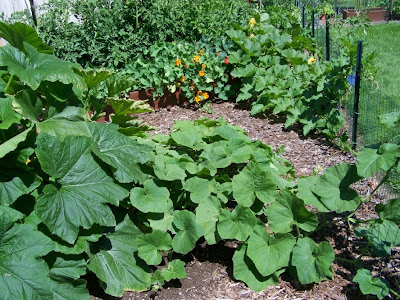 Pathway through the north garden is blocked by squash and pumpkin vines.

I haven't been pruning the indeterminate tomatoes, and they are getting out of hand. I do have heavy garden twine in there somewhere. In fact, I have it about every 10 inches up the poles! You couldn't tell by the way the tomatoes are growing in every which direction. I really think I'll spring for concrete reinforcement wire cages next year, if I decide to grow the indeterminates again. 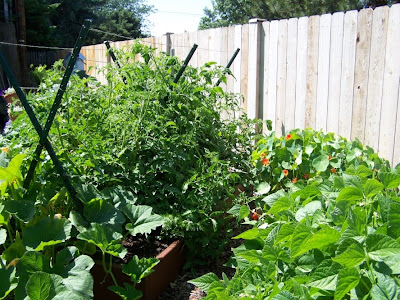 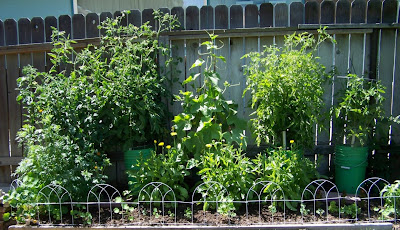 Some of the determinate tomatoes in the self watering containers are almost as large.
I wish I could remember what types of potting mix I bought. The two on the left are larger, greener and more lush than the two on the right. I THINK the ones on the left got potting mix from ACE Hardware, and the other two (and all my bucketed tomatoes) got some from Wal-Mart. If so, the Wal-Mart mix was really weedy, the other wasn't. 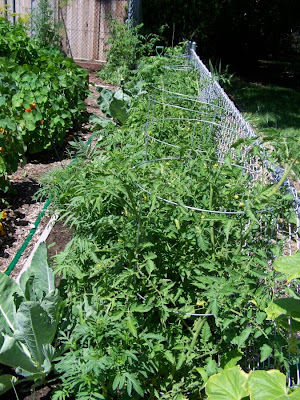 Another row of eight determinate tomatoes in the east garden. 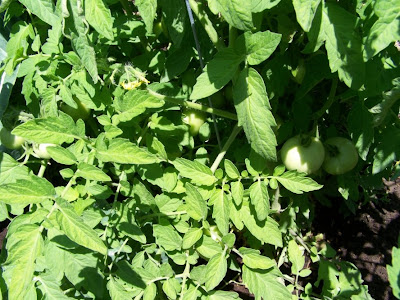 Lots of tomatoes, none of them ripe. 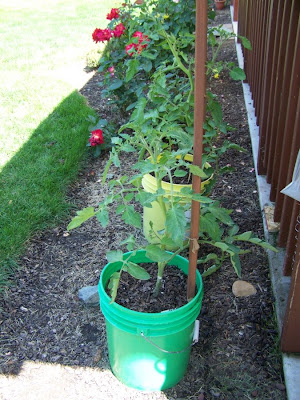 The two bucket tomatoes that get shade in the afternoon are doing much better than the three that get full sun. 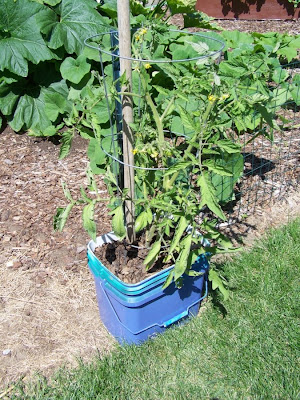 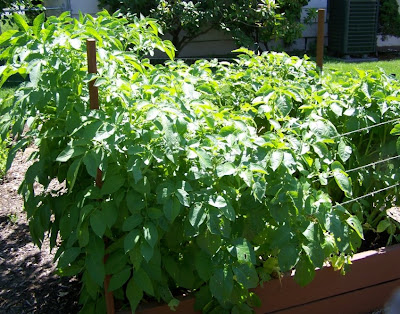 The Yukon Gold potatoes just won't stop growing! They are above the 4' stakes now. 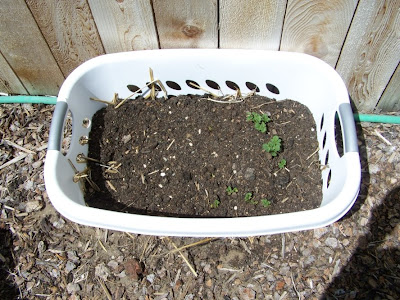 The store bought potatoes that sprouted were planted in an old laundry basket. They are just beginning to peek through their covering of soil and straw. 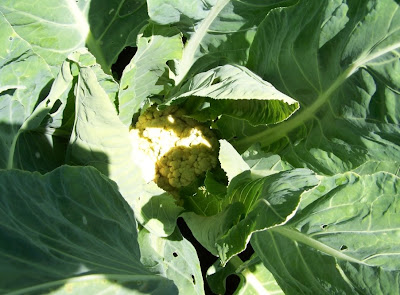 My cauliflower is heading up. Time to blanch it for a nice, white head. 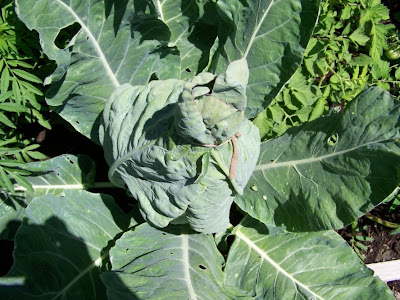 Here it is, covered with its leaves and tied shut to keep the sun out. 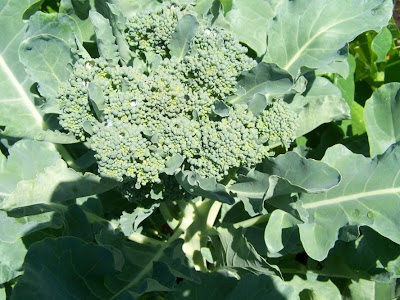 I hope this head of broccoli doesn't bolt on me. I'd like to pick it fresh for Sunday's dinner. 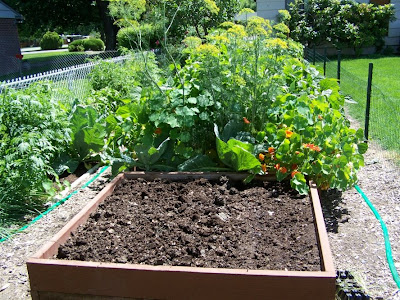 This 4'x4' bed is all ready for planting a second crop. It previously held beets and carrots (and radishes that did nothing), and I guess that's what will go back in there. I can't rotate my crops mid-year, there isn't enough room. And it's beets and carrots we'll be wanting in the fall. 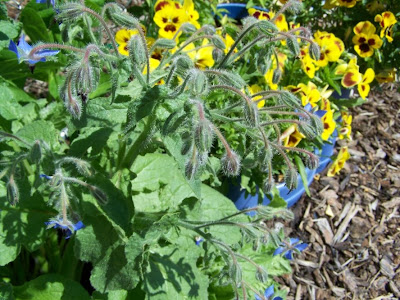 The borage is blooming now. I wish the flowers would hold their pretty heads up. 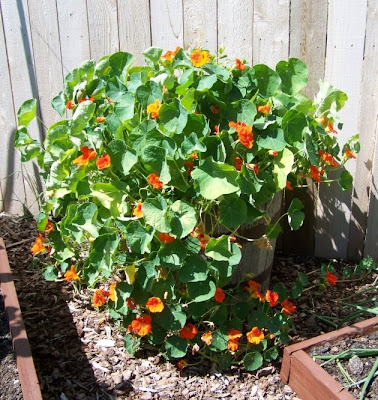 Nasturtiums in the barrels are tumbling all over. 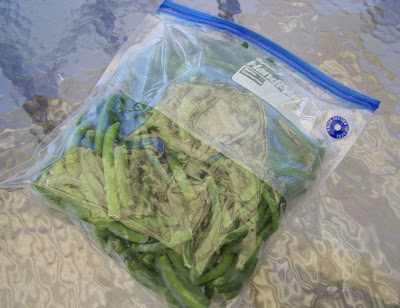 The beans I picked yesterday have been individually frozen on a couple of large baking sheets lined with towels. The towels absorb the excess moisture, and make it easy to transfer the beans to freezer bags. These nearly filled a gallon bag, and I'll be able to add to it the next time I pick beans. When they are frozen individually like this, it's easy to take out just what I need for a meal and toss the rest back into the freezer. When I was blanching these, I found the purple beans were a perfect timer......as soon as they turned green in the boiling water, it was time to drain and chill them. 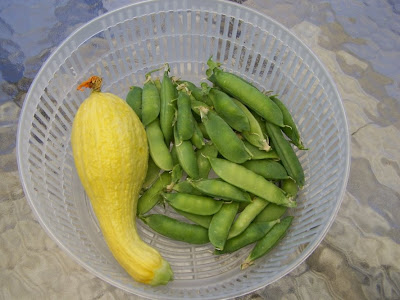 Not much of a harvest today. The first crookneck squash of the season, and the peas, will be used in tonight's dinner. 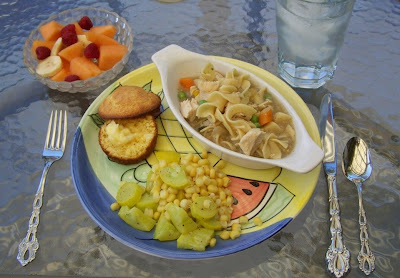