Technically, it is officially summer. It doesn't feel like summer. Yesterday found me working in the yard, wearing a light sweater. Our furnace came on this morning, and around 4:00 a.m. I found myself reaching for another blanket. I'd better enjoy these few cool days while I can, and work as hard as I can, because it's supposed to be back into the 90s by Wednesday.

The garden is looking pretty this morning. The heat wave we'd been having left it looking a bit droopy, but two cool days and a good watering have made it perk up. 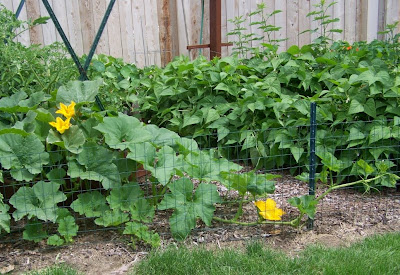 "Daphne's Pumpkin" (the seeds came from Daphne, of Daphne's Dandelions) is threatening to overtake the north garden! The photo shows just half of the plant, it is equally as large growing off to the left. It is beginning to encroach on the tomatoes, which are growing in buckets by the fence. Luckily, the buckets can still be moved, I had to move one to get this photo, I just have no idea where I'm going to move them to! 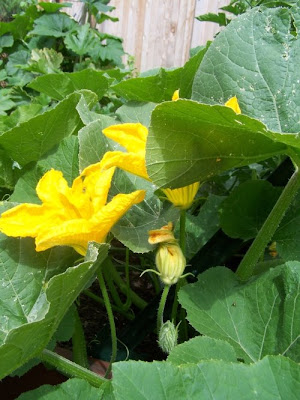 The huge blossoms are visible from my kitchen window, and there are dozens of them! Unfortunately (or not...what would I do with dozens of pumpkins?) most of them are male blossoms. You can tell by the straight stem that holds the blossom. 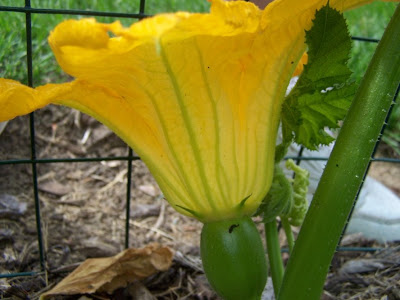 The lone female (she has a rounded swelling below the blossom) has a good chance of surviving with all those male suitors!

I'm loving the meals I'm getting from the garden. From berries for breakfast....... 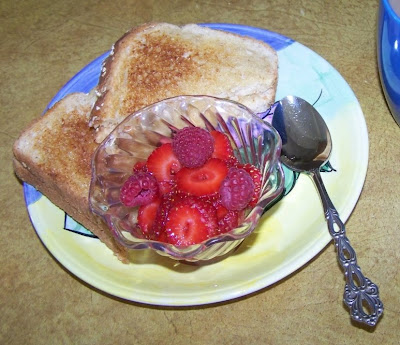 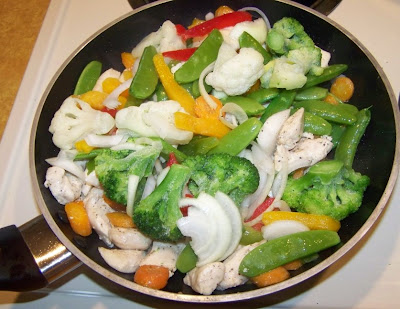 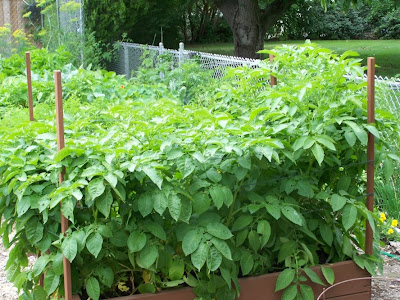 They got so tall I had to corral them with 4-foot long 1x2s and garden twine. 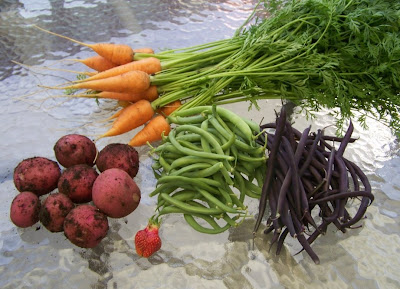 But I have potatoes! Mr. H was unhappy that I took them so small, but I can buy big ones at the store. I want these babies for tonight's beef stew! This morning's harvest totaled one pound of baby red potatoes, one pound of carrots (weighed with tops trimmed off), 6 ounces of purple beans, 8 ounces of green beans....and one strawberry that I missed last night.

I was just commenting to Cheryl, who was unhappy with her short carrots that I wasn't any too pleased with my Chantenay variety, which were little round stubs of maybe 1-2" long, when they are supposed to be 7" tapered carrots. Then I went out to pull some for the stew, and they have grown considerably since the last picking! They are still rather stubby, but certainly a nice size for the stew.

I was happy that the green beans slowed down a bit with the cooler weather. I picked nearly three pounds on Saturday, and I was expecting at least that many today. Instead, I picked just under a pound. Of course, I didn't have my son helping with picking today, so I probably missed half the beans....darned bifocals! I sill have a glut of them in the fridge, and I really didn't want to freeze any, but I may have to. By the way, I staggered the plantings, but they are all producing beans at the same time. It didn't pay to plant extra early, as they just took longer to bear a crop.

We taste tested all three varieties of bush beans Saturday, and the ratings were unanimous. Number one was Contender, which had a "sweeter" taste. Number two was Royal Burgandy, which had a nice beanie flavor, and was the crispest bean of the three. The lowest on our list was Burpee's Stringless Green Pod, which is (of course) the most prolific of the three, but the hardest to pick because of its lush foliage. It also had the blandest flavor. But it only cost 50-cents for the entire crop, with seeds purchased from the dollar store. I mix all three varieties when I cook them, so they all taste pretty good. 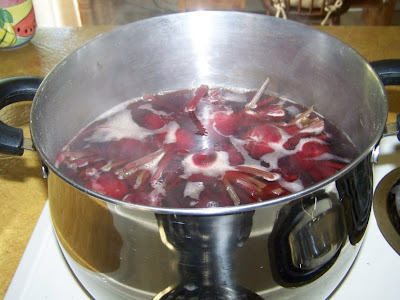 I grew two varieties of beets this year (actually three, but we haven't tried the Chiogga yet), and although it didn't make any difference in the pickled beets, the best tasting plain beets by far were Ace Hybrid over Detroit Dark Red. Not only were they sweeter, they grew larger, faster. 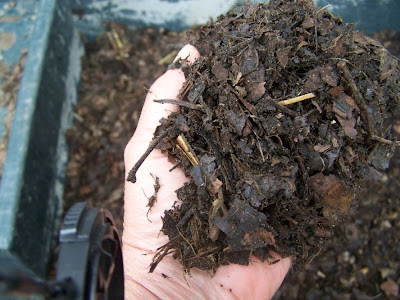 It's the closest I've come to real compost since I stopped having access to all the horsey-poo I could use. It still has some leaves in it, but they're small enough that I'll go ahead and use the entire two garden carts nearly full in the pots, pails and beds!